The Mares of Château de Fontaine and Helgstrand Dressage

Mares… more like super-mares! A super-model, a super-athlete and a super-mom all in one; that is what we call ‘Girl Power’! These wonderful ladies are what bring together Château de Fontaine and Helgstrand Dressage and we are so incredibly thankful. Of course we want only the best for our mares which is why they all reside in our state-of-the art stables here at Château de Fontaine in Normandy, a region internationally renowned for its centuries-old horse-breeding traditions, and at Helgstrand Dressage, which for those who are not familiar, is the world’s leading sales and training centre for elite dressage horses. They set international standards for the future dressage sport with more than 500 horses, 130 employees between stables in Denmark, Germany and Florida.

Each new addition to the family starts their educational journey at Helgstrand Dressage by either being broken in if they are not already or by continuing their education in order to compete in the young horse tests in Denmark, Germany or Holland depending on which studbook they are in. Next up, the young stars will prepare for the qualifications to the young horse world breeding championships where, if we’re lucky enough, they will be selected :)

At Helgstrand they have so many talented riders and it’s a true pleasure to follow all the young talented mares on their journey.

The first mare we purchased to kick start our exciting breeding program was the Westphalian stunner Deevoice (Statatsprämienstute) (by Desperados / Ehrenwort / World Cup III) bred by Gabor Szecsi. Deevoice won the Westphalian German National 3 year old Mare Championship of 2014 in Lienen and was the reserve champion of the 2014 Westphalian Elite Mare Show in Munster-Handorf. The second mare was the outstanding Danish Warmblood Gold Medal and Danish Mare of the Year in 2011, Prima Donna (By Blue Hors Don Romantic / Adiamo / Allegro), who earned an impressive 904 points in the mare performance testing. Prima Donna inspired the name of one of Helgstrand Jewellery collections by Marianne Helgstrand (check out the collection here) and was bred by Birgitte & Peter Hofmeister, Denmark. 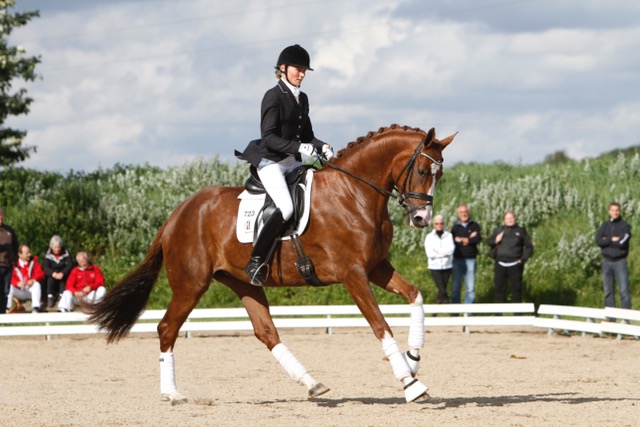 Diva (by Vivaldi / Gribaldi / Notaris), passed only by licensed stallions, champion Desperado and reserve champion Diego, finished third at the 2012 4-year old Pavo Cup Finals, in the Netherlands, earning an 8 for rideability and potential from guest judge rider Eva Möller. Diva was bred by C Van Loon-Van de Berg. Unfortunately, Diva has been injured since so no longer competes. L’Actrice (by Don Tango B / Lorentin I / Raimondo) earned a 9 in canter and became top-scorer at the 2016 IBOP mare testing, with a total score of 84.5 points under American Jackie Ahl-Eckhaus. She also impressed by placing third at the 2016 Dutch Warmblood 3 year old mare championships. 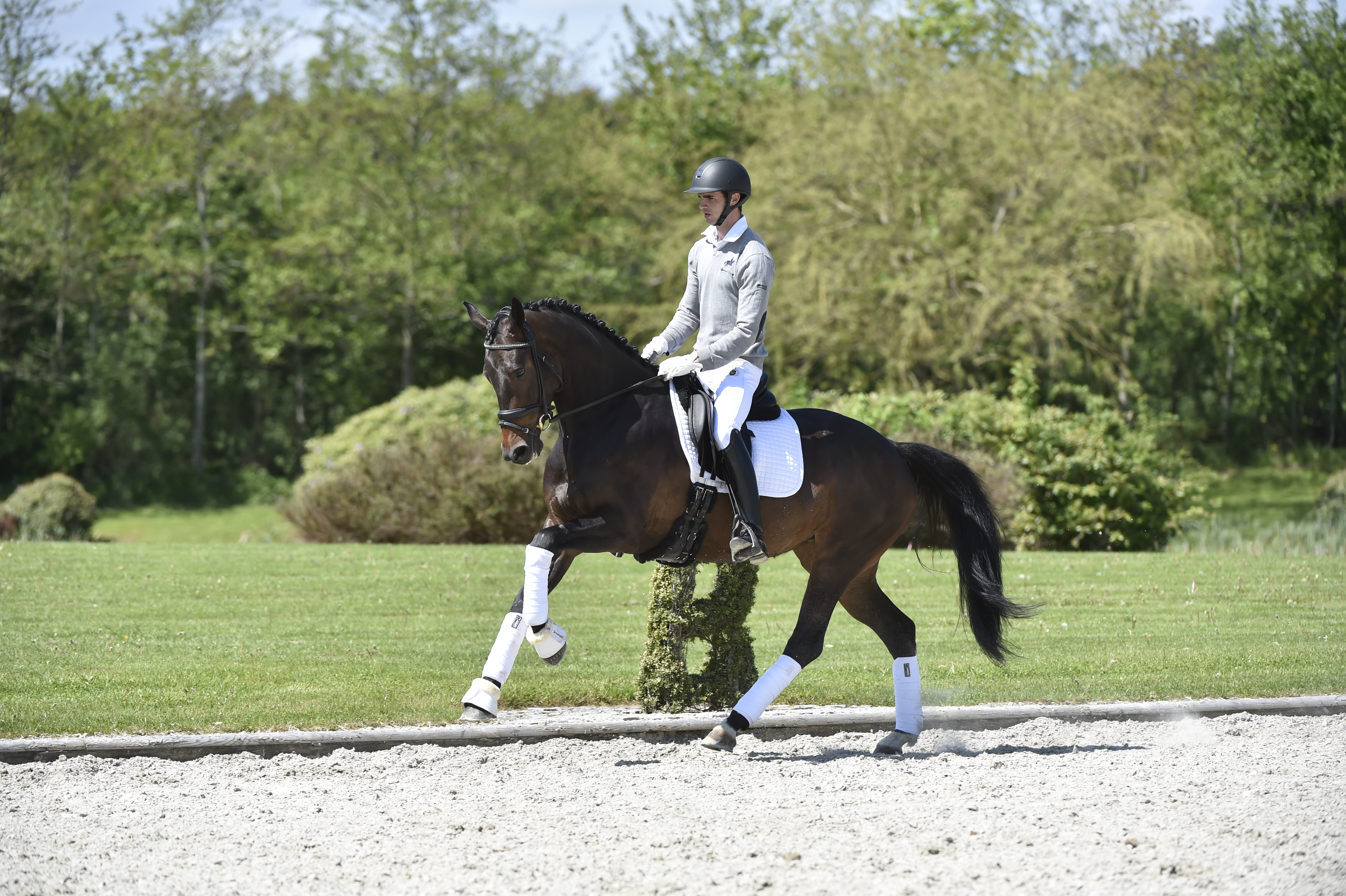 Florentina (by For Romance I / Furst Romancier / Sandro Hit) bred by Josef Schlüter. The beautiful and athletic mare became the prize highlight of the 2016 Westphalian Autumn Elite Auction in Munster-Handorf, Florentina also won the Bundeschampionat qualification class held during the 2017 Westfalen-Woche in Münster-Handorf, Germany with her rider, the one and only Eva Müller. Edmée (by Escolar / Likoto XX / Akzent II) a Rhenish Warmblood born in 2013 and bred by ZG Zühnen. Unfortunately, Edmée was injured and cannot be ridden therefore does not compete, but she is one of our best Mares for breeding. Skyline (by San Amour / Rohdiamant / Donnerhall) was unfortunately injured very early on and can no longer be ridden, but with her beauty, talent, pedigree and temper she is an outstanding breeding mare and we can’t wait to see her first offspring in action. Skyline was bred by Elisabeth Muenstermann. 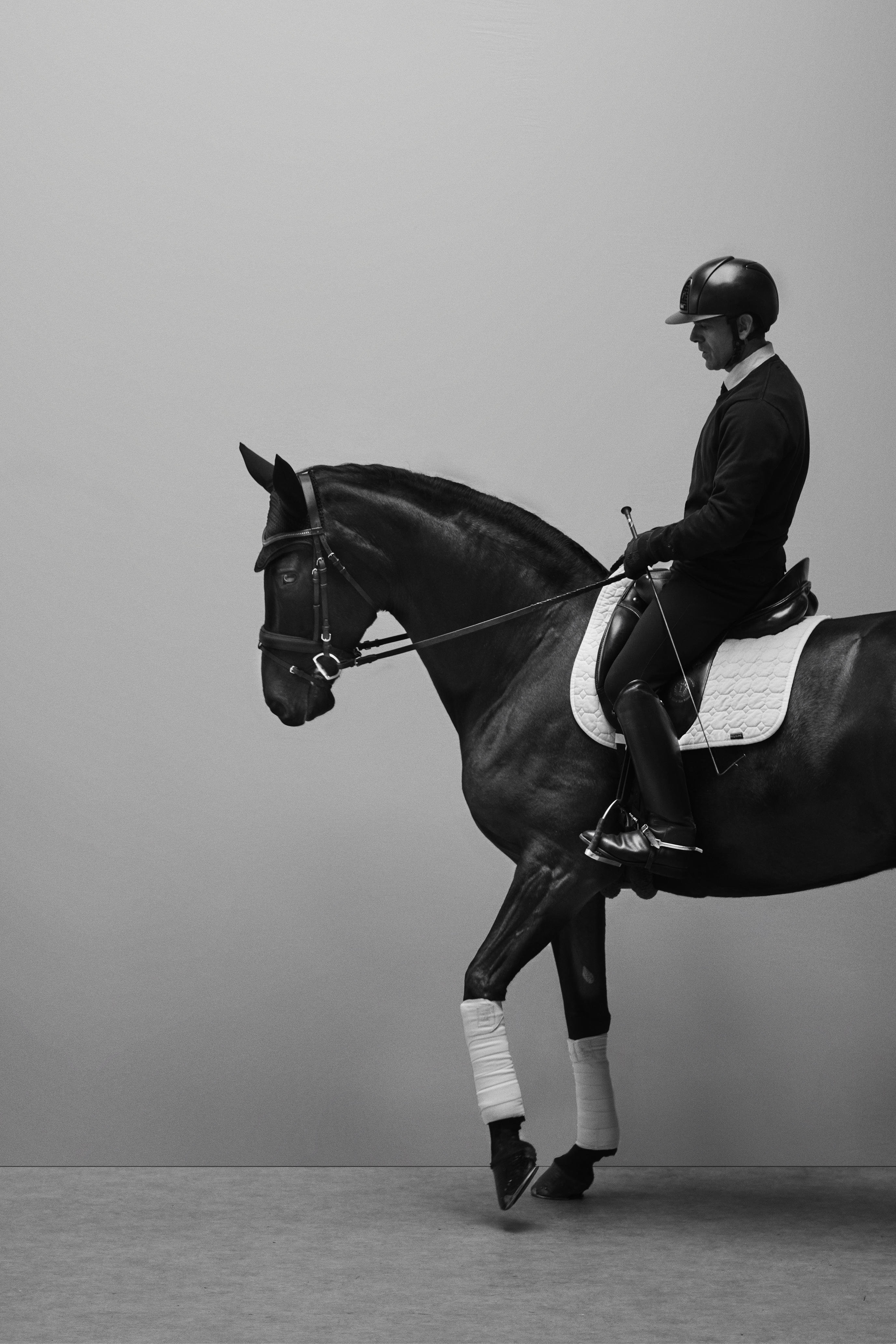 Queenspark Wendy (By Sezuan / Soprano / Solos Landtinus) bred by Kurt Gosmer. This black beauty instagram star #WeLoveWendy and Gold medal Danish Warmblood dressage mare has danced into everybody's hearts with the boss himself Andreas Helgstrand. Wendy earned a 10 for her very uphill and ground-covering canter at the 2017 Danish Warmblood Elite Show, Vilhelmsborg, Denmark as a 3 year old. At 4 years old in 2018 Wendy won Bronze in the Finals of the Young Horse Championship in Denmark, only passed by the stallions, Springbank II and Blue Hors Zackery. When she was 5 years old, she went on to win the Danish Championship. She qualified for the finals at the Dressage World Breeding Young Horse Championship in 2019 where she came 3rd with Andreas Helgstrand as her rider. Queenspark Wendy was the best mare in the world that year! We can’t wait to see what the future holds for her and her offspring. 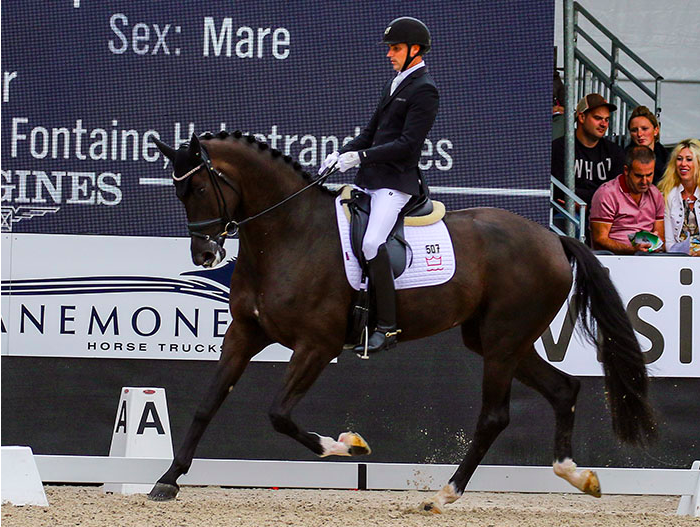 Romanova (Romanov Blue Hors / Danone I / Sandro Hit) with her then rider Rikke Dupont, finished as group winner and second in total at the Hanoverian Championship for 4-year-old mares and geldings in 2014. 71 horses started the class and Romanova and Rikke obtained 8.60 points putting them amongst the 10 best equipages through to the finals. In the finals, Romanova and Rikke made a superb performance finishing as winners of the class with impressive scores, e.g. 9.5 for trot, canter and rideability. She has been further educated by the super talented Anna Kasprzak from whom we were so lucky to be able to purchase her. Romanova was bred by Wilhelm Schwierking. 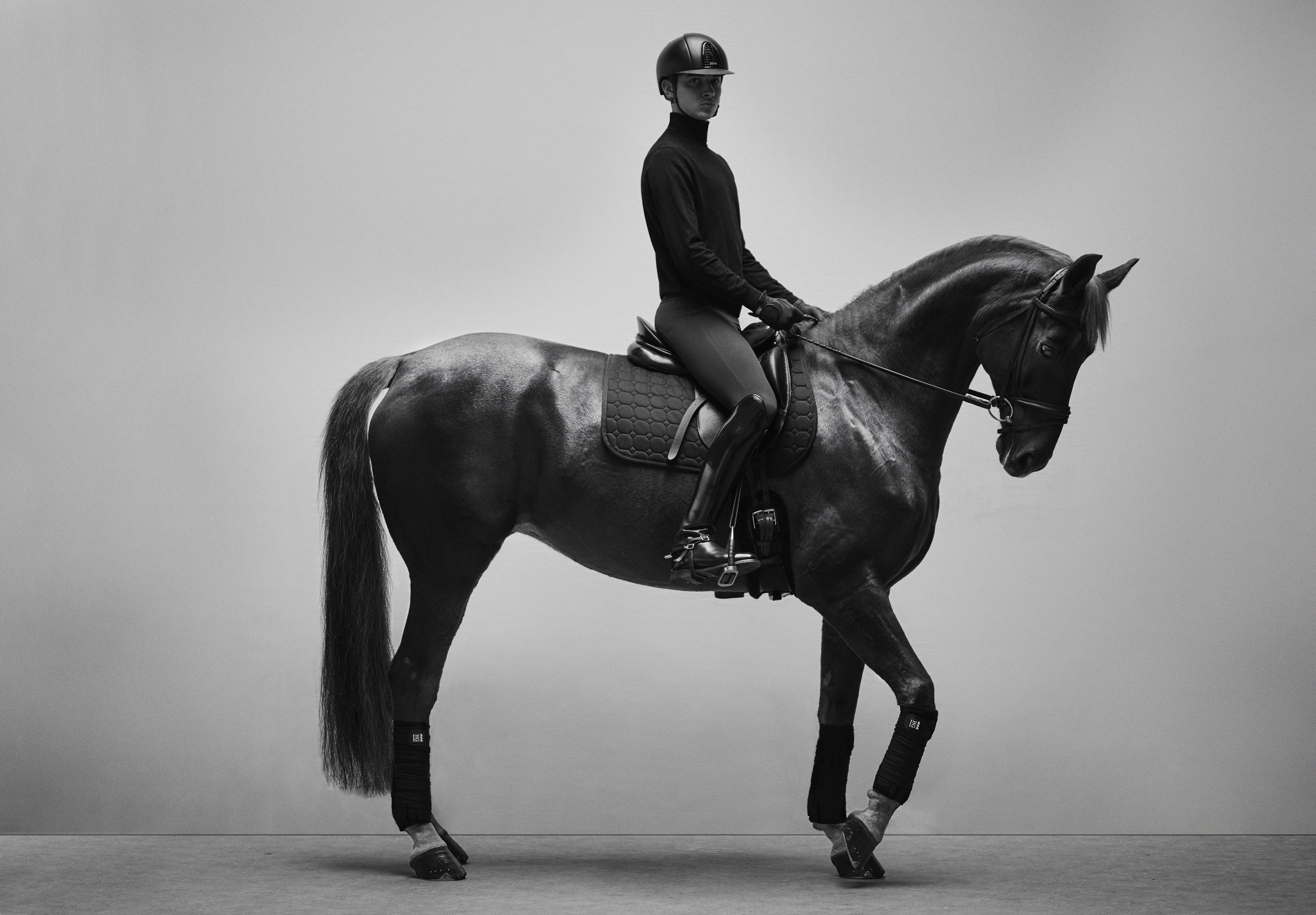 Shakira (by Sezuan / Tailormade Temptation / Blue Hors Don Schufro) is our newest addition and was rewarded with a gold medal in Danish Warmblood 2020.
Shakira scored 10 for canter, 9.5 for rideability and 9.0 for capacity and trot. Shakira is from the silver-medal mare Vestermarken’s Tequila and finished the official riding test with a very impressive 900 points. She is bred by Kirsten Buus. Sherry (by Sezuan / Londonberry / Pandur) is now 4 years old and we can't wait for her future and future off spring. 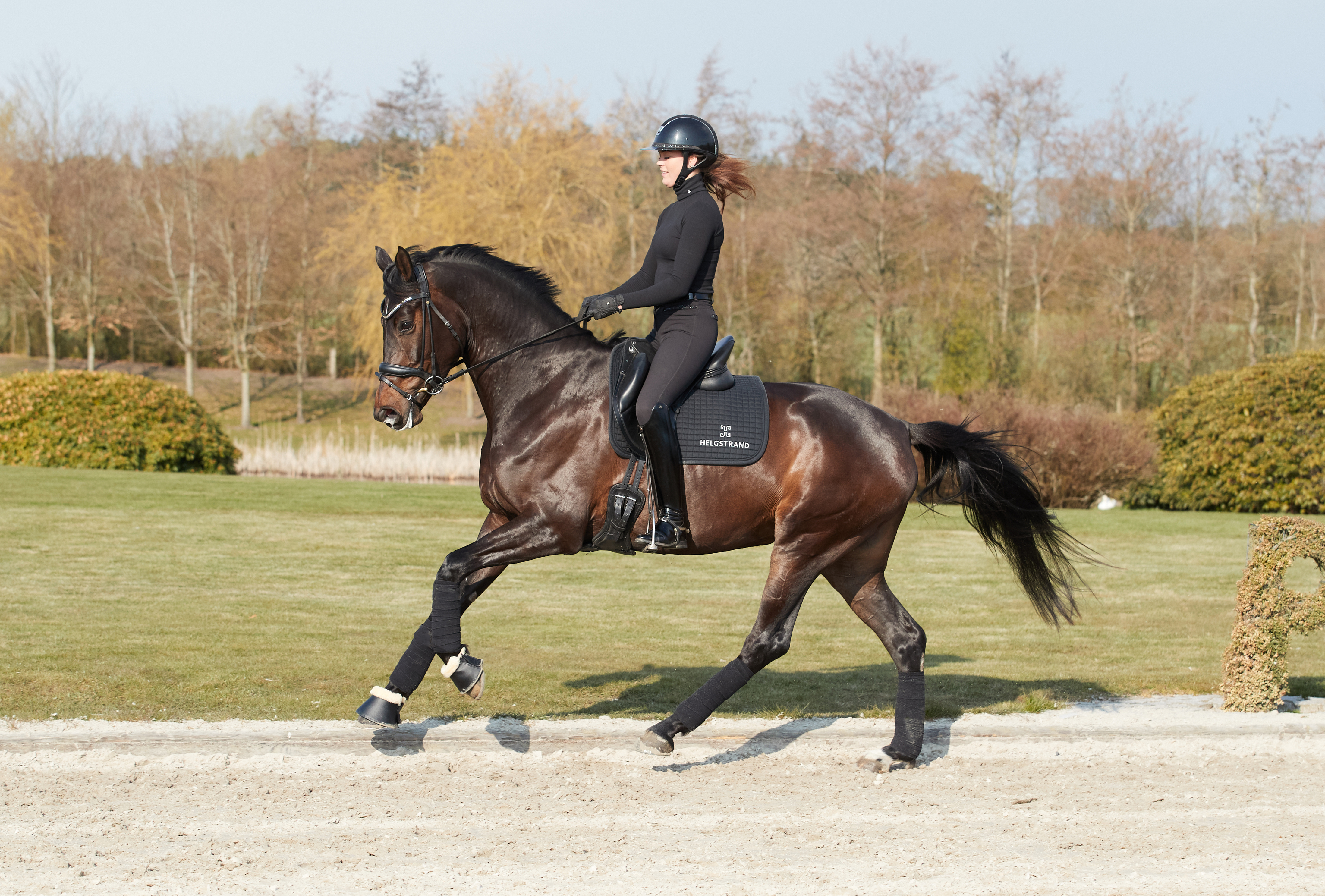 Galerina de Fontaine (by Galaxy / Conen / Fidertanz) is out of Casablanca who rocked the international dressage arena with her rider Simone Pearce in Ermelo 2017, earning 9.5 for trot, 8.8 walk, 9.5 canter, and a whooping 9.0 for capacity, placing her 4th in the Dressage World Breeding Young Horse Championship final. Galerina was bred at the Château in 2017 and we are so proud to be bringing home-bred mares into our breeding program. Rose de Fontaine (by Revolution / Chagall / Lord Sinclair) is another mare bred at the Château. This stunning mare is by Revolution out of Hutopia, who is from one of Holland’s strongest and most renowned mare lines – the Utopia line, which has also produced Vivaldi, one of the most desired dressage sires of his generation. Fiorina (By Franklin / Conen / Fidertanz) is now a 3-year-old offspring from Casablanca and was bred here at the Château. We look forward to Fiorina's journey and for her future off spring. We are super excited to see what the future has in store for these gorgeous girls and their future offspring. You can find out which Mares are expecting in 2021, by checking out our Foal blog here.