Bolette Wandt is the founder of the Haras de Château de Fontaine who, with her vision tightly in hand, is trying to build something that can continue the dressage sport and spirit.

For Bolette, that has meant dedicating the last five years to turning a plot of land and a dream into a scope of brand-new stables for her now almost 100 horses, vast grass pastures for them to roam on, and a state-of-the-art arena for them to practice their dressage in.

But Bolette admits that the process hasn’t been easy and that, like with a horse, if you want your dream to go somewhere, you can’t stop holding the reins.

Where exactly, though, was this passion for horses born that compelled Bolette to embark on such a considerable project? We dive into the beginning of Bolette’s story as she recalls her journey of growing up. 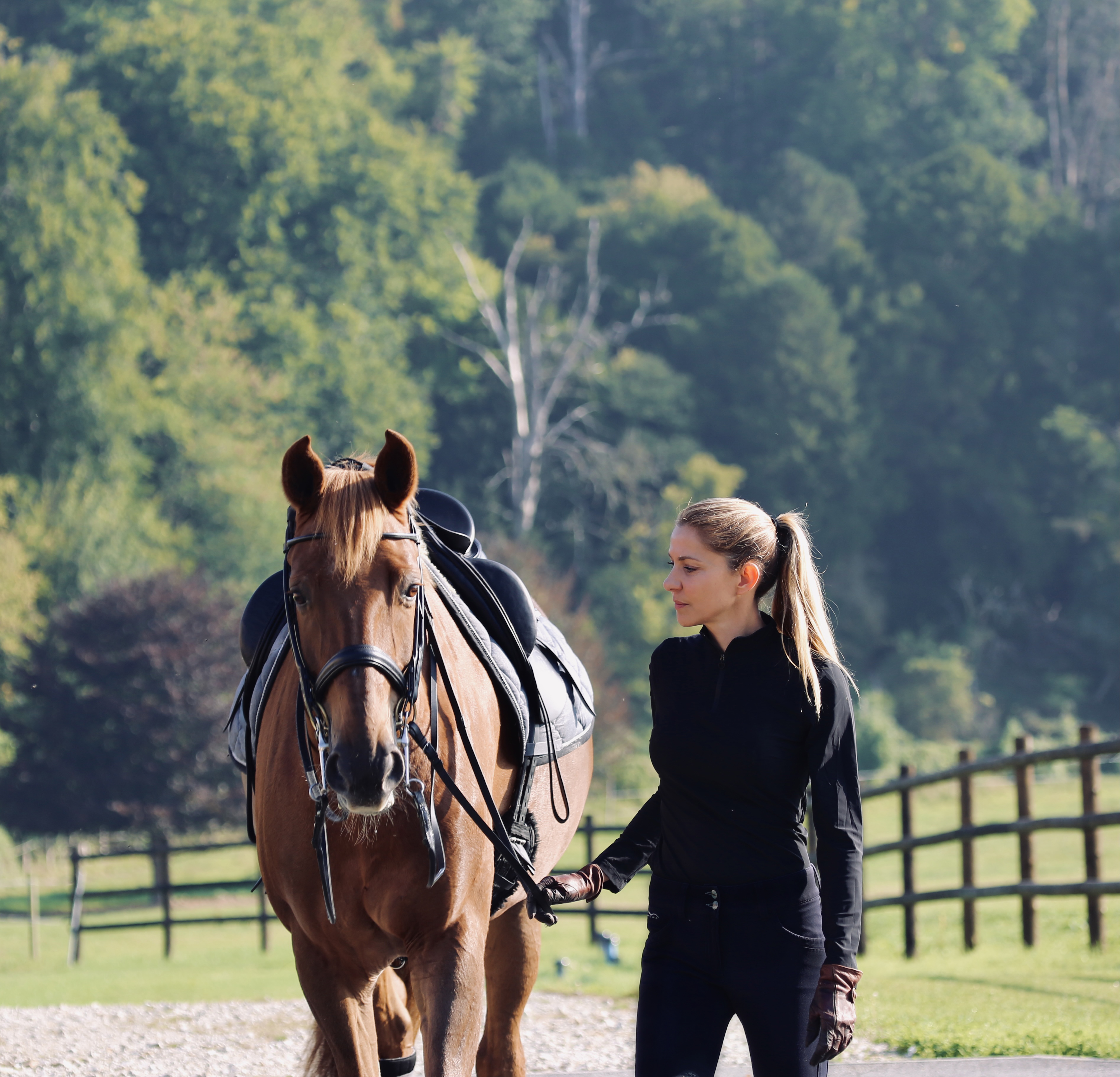 The story begins when Bolette and her family were living in a small hut in the forest, rented out to them by a Manor House where Bolette’s father worked, just next door. The Manor House earned its livelihood by administering the forest that enclosed it, with help from a group of large working horses that would pull the heavy logs. Seeing and interacting with these grand and powerful creatures is where Bolette’s passion was kindled; she felt eased by the warm air and the timid touch of the horses’ soft muzzles, as they nosily probed her hands and hair.

Ole, Bolette’s dad, noticed the sparkle in her eyes and used the Manor’s workshop to carefully make Bolette her first horse, a wooden hobby-horse that would soon come to be known as Lotte. Bolette and Lotte starred in countless one-man shows, fueled by the limitless energy of a kid, a dream of bigger things, and a whole lot of imagination. Now-a-days, however, Lotte is taking life a little slower and is spending her days with Bolette’s parents in Denmark. 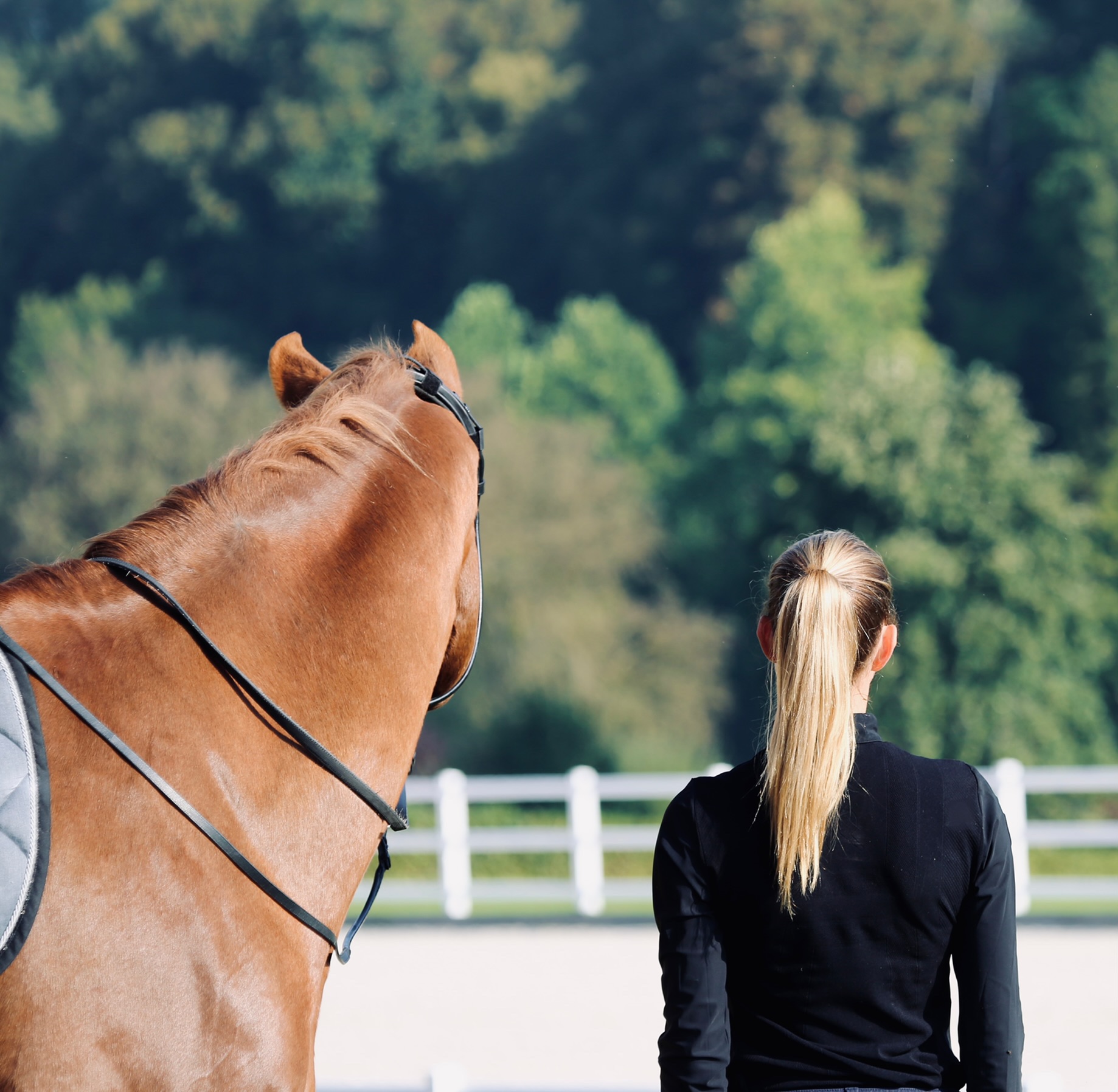 While her hobby horse had become one of her best friends, Bolette’s passion for horses was still burning brightly, and something seemed to be missing. When Bolette was 11, her family moved to a house in the countryside and, to Bolette’s great delight, went and found an affordable pony that could live at the house. The picture was complete.

The pony wasn’t broken in, so Bolette and her father were tasked with training him. Soon, however, the pony was helping out all year round, with the horsepower needed to pull a sleigh during winter, and a wagon during summer. One time, 11-year-old Bolette even rode the pony through town to the vet, with their newly-born kittens carefully nestled in her lap. Bolette was living in a fairytale.

Therefore, it was to Bolette’s great bitterness when her parents told her that they would be moving house again. Everything had just seemed to fall in place. But the young Bolette didn’t manage to convince her parents to change their grown-up plans and stay in the little house. Luckily however, at that age, things have a way of turning out alright in the end, and sometimes in the most unexpected of ways. 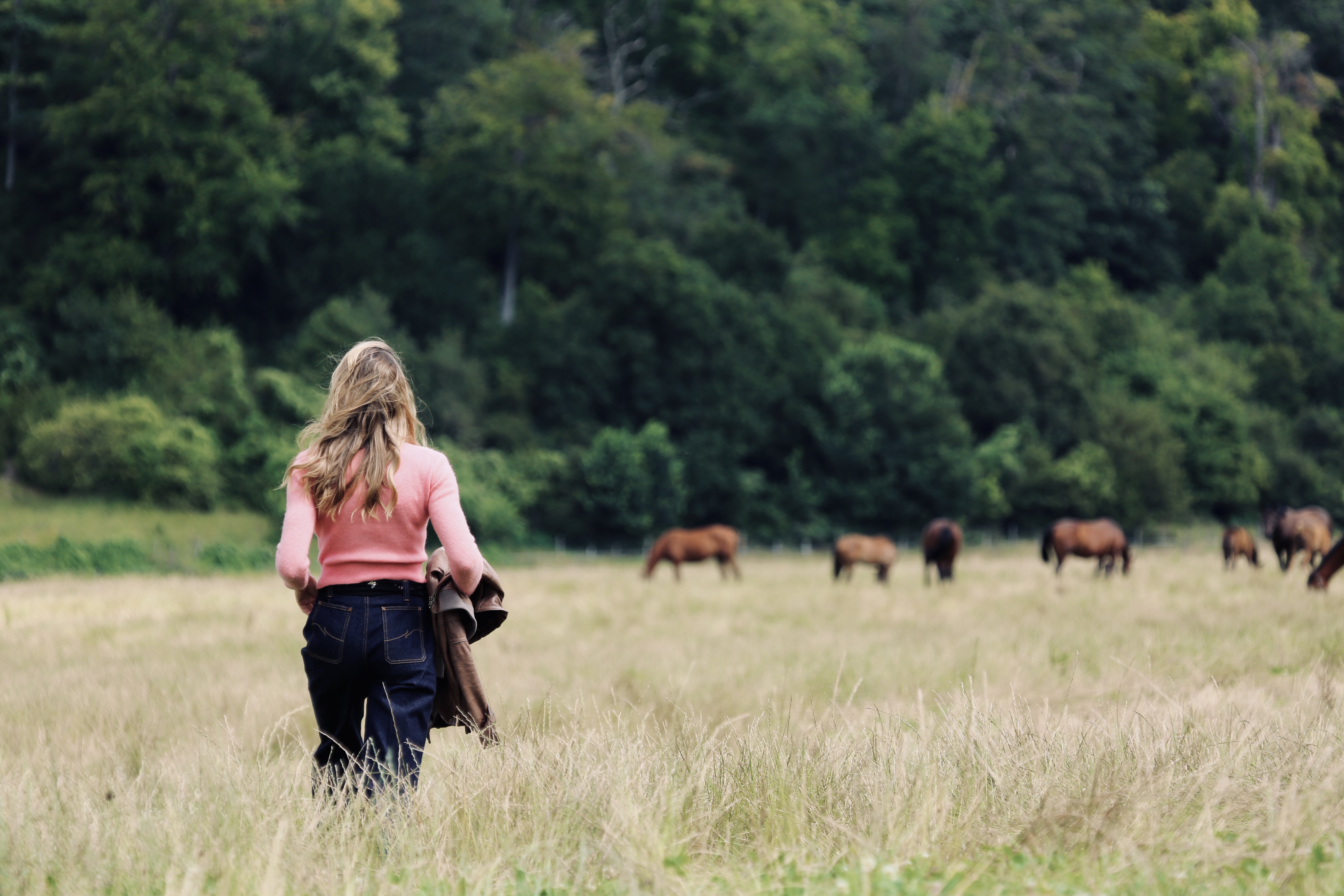 When they moved in, Bolette’s family was once again stood facing a house with no electricity, no running water and not even a toilet in the house. What they later found out that they did have, however, was Hasse Hoffman as their next-door neighbour. A master equestrian and one of the great profiles of the dressage sport, who has trained several horses for international Grand Prix.

When Bolette first managed to catch a peek of Hasse’s impressive dressage horses, it was clear that they were like nothing she had ever seen before. Lotte was a first-rate and extremely well-mannered horse, but the dressage horses had an elegance and power that outshone even this. And, just like that, the spark had returned to Bolette and she was left with new dreams bouncing around in her head. 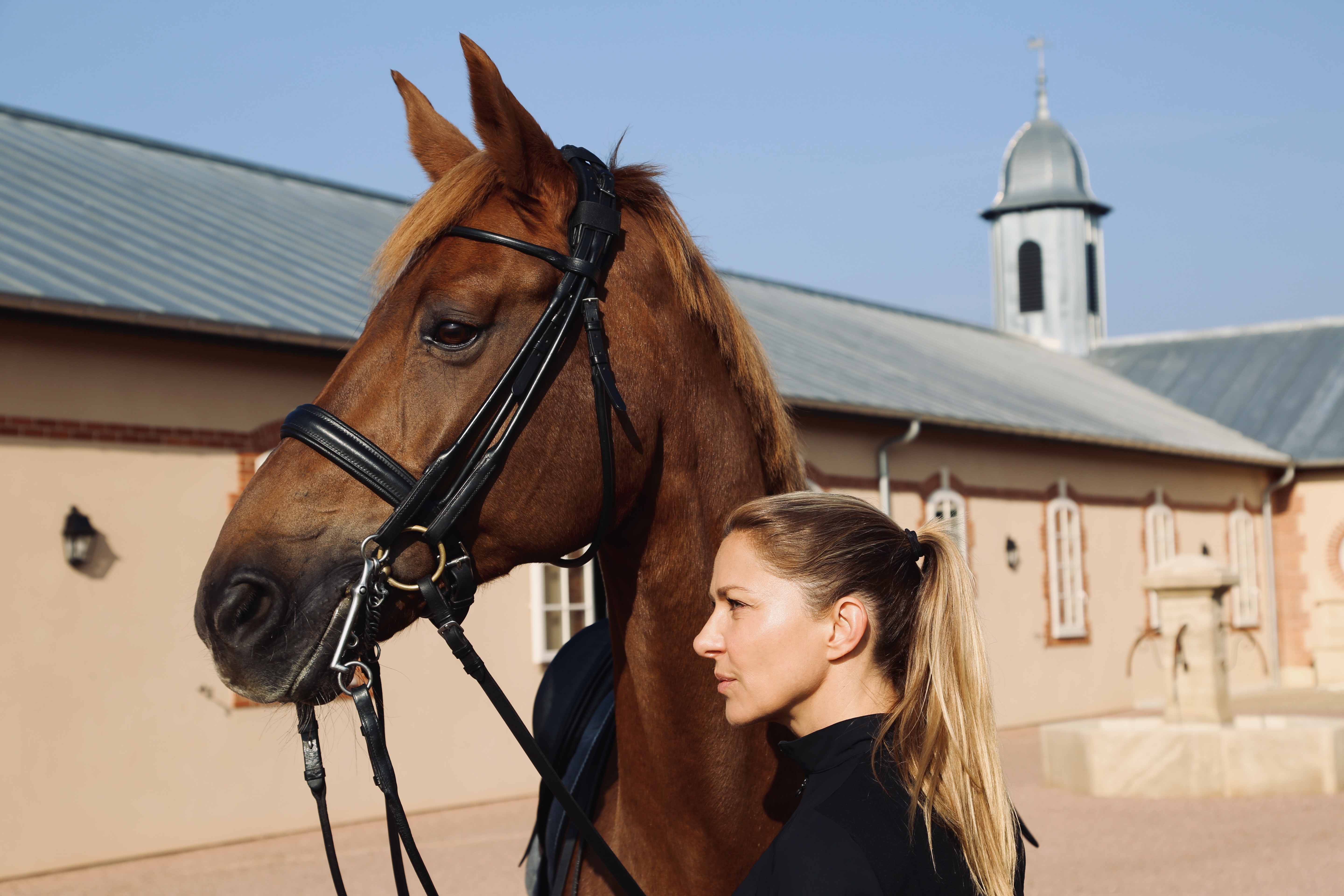 Even many years later, after Bolette had left the nest and was playing hard to get for a certain husband-to-be, the dream persisted. Therefore, after much thought on the subject, Bolette chose to use her child savings to buy her first Danish Warmblood, Mona Lisa. Mona Lisa was a foal when Bolette bought her, but it just so happened that when she turned 3-years-old and was ready to start being ridden, Bolette was looking to expand the family. Not wanting to leave a friend behind, Mona Lisa also became pregnant with her first foal, in what would later lead to a series of 15 healthy foals and some very proud parents, as well as Bolette’s first steps as a breeder of dressage horses.

Over the next 20 years, Bolette’s family welcomed no shortage of kids, dogs, cats and even a tortoise to the gang. Eventually, work and a lingering curiosity saw the whole family moving to London, where a warm and cheerful home, together with a busy day-to-day life, quickly eclipsed the larger world’s dreams and problems alike. Even so, life in London still seemed to constantly revolve around horses for Bolette. A new show with horses on TV? Nice! We’re watching it! A shop with nice, trendy clothes drawing inspiration from horses? Double Nice! Let’s check it out!

Apparently, the only thing that could keep Bolette from talking about horses, was talking about fashion. And, while London made it difficult to see a lot of horses, it did present the perfect opportunity to step into the world of fashion. With its famous, Victorian streets, and a myriad of trendy shops, each attempting to capture the attention of passersby through a grand, window-shop display, London was the place where Bolette’s fervour for fashion caught flame. However, once you’ve visited the world of horses, it tends to continue calling you back, no matter how much time passes.

Thus, in 2014, Bolette’s move to the beautiful countryside of northern France, presented the perfect opportunity to rekindle the latent dream and do something about it. Bolette’s London hiatus from horses had done nothing to diminish the magnitude of her dreams, and she quickly decided that if she was going to do this, she was going to do it right. A bit of planning and a few determined phone calls later, Bolette was sharing a cup of coffee with the world-renowned dressage figure, Andreas Helgstrand. Little more than an hour from sitting down, Bolette and Andreas had bought their first horse together: Deevoice. Andreas more than managed to live up to the high praise that Bolette had heard of him through word-of-mouth, but the conversation was flowing and Andreas was full of both good ideas and a welcoming, can-do attitude. This coffee meet-up would become the beginning of an equally exciting friend- and partnership. Andreas and Bolette are now working together to breed and train horses that can compete at the highest level of competition, using the Château de Fontaine in France to provide the horses with the happy foundation Bolette had always envisioned for them. And while the previous five years have been extremely exciting, what’s coming next is sure to leave some astonished faces.